If you’re new here, you may want to subscribe to my RSS feed. Thanks for visiting!

For the past two years, more and more people have been learning about food independence. People are cooking from scratch, gardening, and raising their own animals. And that’s great! It’s a big learning curve, but it’s so worth it in terms of food independence, the confidence of new skills mastered, and delicious meals.

The internet holds a lot of advice on getting started with various animals. I started raising chickens in 2014, using what I’d learned from books and a fellow farmer to keep my birds alive. Since then, we’ve raised chickens, goats, and lambs for meat. Recently, I took pigs to the processor for the first time and encountered another big learning curve. I had heard pigs were difficult to load into trailers, but I didn’t quite realize the level of psychological warfare it was going to require.

Because I had always heard you need to lure pigs into trailers with food, the night before, we didn’t give the pigs their dinner assuming Monday morning they’d be ready to follow us anywhere. I even boiled up a big pot of potatoes. My pigs always loved boiled potatoes.

The pigs had been enclosed in an area with hot wire. We took down the hot wire, backed the trailer in, and grabbed the pot of potatoes.

The pigs were immediately suspicious.

I had never seen them so uninterested in food. We spent probably half an hour trying to get them interested. They would sniff the potatoes but then wouldn’t follow us. I thought maybe they only wanted food from their normal feeder, so we lifted the pig feeder into the trailer. No luck. I thought to myself, maybe we need something more exciting and addictive. We still had some leftover Easter candy from last year. I went inside and brought it back.

The jelly beans worked, kind of. We had three pigs, a male who was the largest, and then two smaller females. The plan was to get the male into one side of the trailer and the females onto the other side. My kids and I started making a trail of jelly beans from the pigs to the trailer. We joked that we were like Hansel and Gretel. My bigger female was interested right away. She began to follow us, and we were able to lure her into one side of the trailer. We had to help her get her back legs up, but we got her in, and we thought we were on the road to success.

The pigs were really interested in the jelly beans.

We’d never given them sugar like that before. And before too long, the pigs acted the same way children do at birthday parties when they’re overloaded with sugar. My pig in the trailer started squealing a lot. The other two started running around in circles. We got the other female close to the trailer, but as soon as we opened the door to let her in, the other female crashed out.

But we had to keep trying. The male seemed to like chocolate better than jellybeans, so we let the females run around and put a trail of chocolate into the other side of the trailer, and that worked. He also needed help getting in, but we were able to do it. One down, happily munching on chocolate and hay.

They were suspicious, though. It was hard to even get them close to the trailer. One of my children spends a lot of time with horses. She said that sometimes animals need their eyes covered to calm down and be led. We had a large metal trough that we’d put up as a windbreak. It was big enough to flip over the pig, but light enough we could move it.

We tried that, and it actually worked. We were able to push the pig toward the trailer. She couldn’t see, so she wasn’t as nervous. We got her to the back of the trailer, opened the door, flipped the trough back, and my daughter was inside the trailer holding jelly beans for the piggy. My older son and I were able to push her back legs up, and she was in.

She was in, and she was exhausted. She lay down right at the entrance and wouldn’t budge, and that proved to be the end of our pig-loading adventure. The third pig was the most suspicious. She had, after all, been in the trailer before. We tried every trick we’d tried before and could get her close to the trailer, but the other female had fallen asleep right at the entrance, and we couldn’t move her.

My youngest son had been keeping my dogs distracted during this whole ordeal. I asked him what time it was. He said 9:20. I had wanted to leave at 7. We had needed to leave at 9 to reach the processor on time. I told the kids we were just going to have to leave the third.

Tired and filthy from sliding around in pig mud, we drove down and dropped the pigs off. I was embarrassed to show up so late and without a pig, but the processor said stuff like that always happened with pigs. We also found that the family-owned restaurant I’d been looking forward to visiting after dropping off the pigs had closed (thanks, Covid rules!). I’d brought bagels along for the kids, so they had food, but I didn’t get around to eating anything till two that afternoon. I got a bacon cheeseburger. I was in the mood for bacon after that ordeal.

Failures of this magnitude provide learning opportunities. So, what did we learn?

The kids and I had a few discussions about next time.

Next time we do pigs, we’ll back the trailer into their area a couple of weeks before the processing date and start keeping the feed in there, so the pigs get used to going in and out of the trailer. That’s what we’re doing with our Lone Survivor piggy right now. Once I got back, I put the trailer into where the piggy enclosure used to be, unhitched it, and now she readily gets in and out whenever it’s time for food.

It’s not like we didn’t have any experience with loading animals. But chickens are easy to grab when they’re asleep, we had leash-trained our goats, and sheep have nice big horns that are easy to grab onto and simply lead into trailers. Chickens, goats, and sheep are also not 300+ pounds. I had thought my pigs were between 150 and 200 pounds. Imagine my surprise when they got onto the scale at the processor, and the two together were 625 pounds. No wonder we couldn’t budge them when they laid down!

We’re going to bring in the third pig next week when we pick up the meat from the first two.

I feel bad that her friends are gone. I destroyed the hot wire to back the trailer in, thinking I wouldn’t need it anymore anyway, so for now, she hangs out with my dogs. Fortunately, the ground has been cold enough that she isn’t really doing much damage.

For now, all the kids and I can do is laugh at ourselves, and the right TV shows can help us. We like Bob’s Burgers because it’s another show about a family trying to run a small business where things constantly go wrong.

(Things going wrong is a part of life. All the more reason to read our free QUICKSTART Guide to the four levels of disaster, right?)

A lot of people are making changes right now, whether through choice or necessity, and if you’re struggling, it helps to remember that other people are probably struggling too.

If you’ve been frustrated trying to start a garden or cook from scratch, keep in mind that things go wrong even for people that have been homesteading for a decade or more. I’ve been loading various animals into trailers for years. I had thought I could handle loading pigs into a trailer in something resembling a timely fashion. Nope. We failed, but we have to keep on trying. That’s just how it goes. The day you stop learning is the day they put you in the ground, and failure is part of that.

Learning to raise your own food and becoming more self-sufficient is a worthy endeavor, and I really think it will take a lot of people to become a little more independent in these ways to make the United States strong again. The world isn’t a nice place. It has never been. For the past 80 years or so, a large chunk of the population has been able to get away with thinking that if everyone just does their one job, they can trust the supply chains to bring them everything else. That’s not the case anymore.

Those who insist on only doing one job and trusting “the economy” to handle everything else will be the ones sleepwalking into Klaus Schwab’s nightmare world of urban surveillance regimes where everyone eats bugs, owns nothing, and is happy. If you don’t think the world powers are trying to make this happen, you’re not paying attention.

The only real alternative is opting out of the current system in whatever little ways we can. For some of us, that means raising livestock, with its chasing animals and getting muddy. For many others, it will be various side endeavors, with the risks and rewards of running independent ventures. Jose has written many times about the little ways in which people in Venezuela have gotten by after the collapse of their economy. Those most willing to work hard and adapt fare the best.

So if you’re having a hard time becoming more self-sufficient, don’t let it get you down. Even relatively experienced people have occasional catastrophic failures. Keep talking to people. Keep reading websites full of useful tips! It may not feel like it sometimes, but there are a lot of like-minded people out there to support you.

Joanna has been homeschooling three children since 2012. In 2014, she moved to the High Plains of Colorado. She and her children began a little homestead, gardening and raising chickens for eggs and meat. One animal led to another, and these days they have livestock guardian dogs, chickens, geese, ducks, alpacas, goats, pigs, and one very spoiled cat. 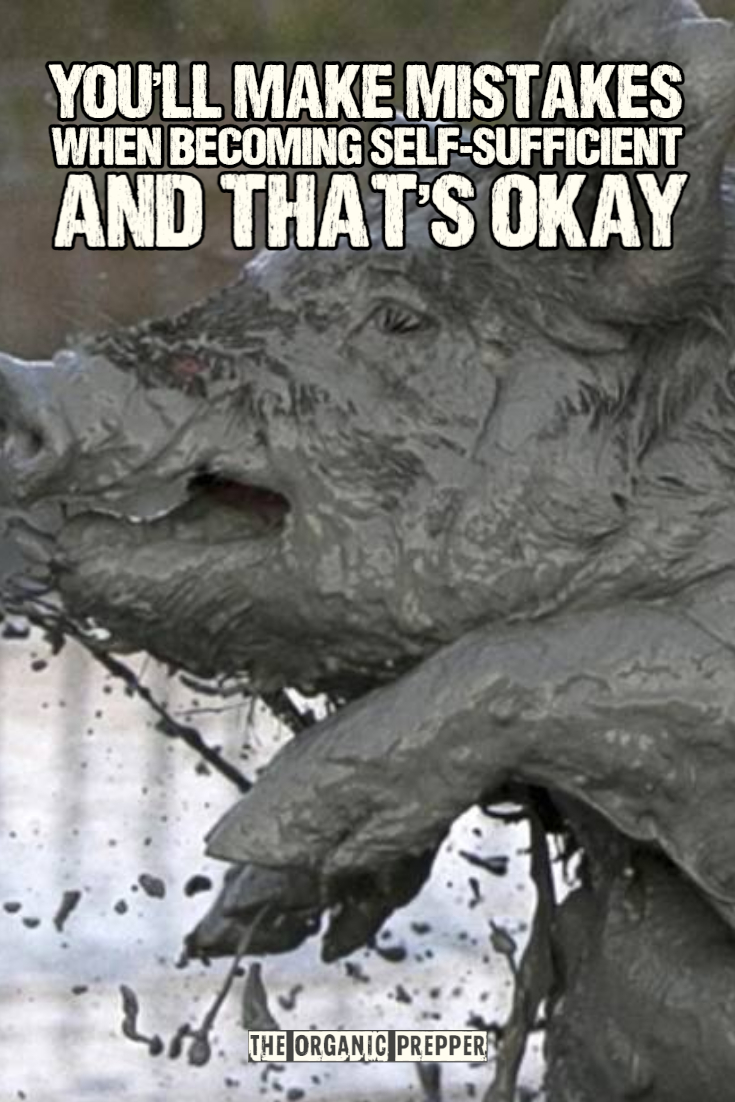