In Defense of Organic Farming

If you’re new here, you may want to subscribe to my RSS feed. Thanks for visiting!

By now, even the mainstream media widely acknowledges the fertilizer shortage. Between fertilizer shortages, drought, shipping problems, and fuel shortages we face an ugly winter. And naturally, the technocratic class has been using this situation to bemoan the “Folly of Organic Farming,” as Bjorn Lomborg (same Bjorn?) called it in a recent Wall Street Journal editorial, pointing to the coming food crisis as another reason why we need to trust scientists and academic experts for everything.

Don’t panic. If you’re interested in growing some of your own food but are not sure where to start, talk of the fertilizer shortages may find you feeling helpless and confused. Don’t let the issues surrounding commercial food production discourage you from starting your own urban/suburban food production scheme.

Organic food production is not as ridiculous as people like Mr. Lomborg like to make it sound. I say this as someone who has been producing much of her own food organically, both in a suburban and a semi-rural setting, for years. But we need to mentally separate the issues surrounding industrial-scale food production from what you’re likely to encounter in planning your own garden.

In my area, it’s already noticeable. I attend a church about 25 miles away, and I drive through farm country to get there. I’ve been going there for years. Normally, there is a mixture of corn, alfalfa, hay, and sunflowers, but mostly corn. This year there’s far less corn. People have been planting more alfalfa because it doesn’t take much fertilizer.

Modern plant varieties have been bred to produce heavily with a lot of chemical inputs.

Correspondingly, the chemical inputs have depleted much of the microbial life within the soil. So, yes, if you develop a system with plants that rely on chemicals and then remove the chemicals, this will badly affect your crop yield. That is happening right now in Sri Lanka, as Mr. Lomborg points out in his article, and used as a blanket condemnation of organic agriculture.

But organic farming is more than just not dumping chemicals on your plants.

It’s a system of feeding the soil that feeds your plants. If you want to learn more about producing your own food, do some research. My personal favorite books on the subject are Howard Garrett’s Texas Gardening the Natural Way and John Seymour’s The Self-Sufficient Life and How to Live It.

I have practiced this style of gardening both in a humid subtropical climate and in a semiarid steppe climate. Gardening in a semiarid steppe is very difficult. Making compost takes longer because of the low humidity and rainfall. I also need to enclose everything to protect both the plants and the compost heap from the wind. It’s difficult, but not impossible.

Conventional wisdom states that only high-efficiency, industrial-scale agriculture can feed the world. Proponents of industrial agriculture point to the huge gains in crop yields made since the Green Revolution in the 1960s and 1970s. They also point to regularly-occurring famines in various parts of the world as evidence that we need to produce more food.

However, famines have many causes besides environmental constraints.

The biggest famines of the past 100 years have been caused not by environmental disasters but by political ones. Both the Soviet famine in the 1930s and the Chinese famine in the late 1950s occurred when Communist governments collectivized agriculture.

The famines occurring in Africa today are political. The Yemenis are starving to death, not because they can’t produce food and not because others don’t have food to share; but because their farmland has been targeted for destruction and the Saudis have only allowed small amounts of aid.

(Looking at learning how to can the food that you produce? Check out our free QUICKSTART Guide on the subject.)

But humans cannot live by bread alone, at least not optimally. Most of us need meat, veggies, and maybe some dairy thrown in as well. The yields for these have increased, largely due to the fact that grain-fed cattle put on weight faster than grass-finished. However, there is a tradeoff here: the cattle themselves are less healthy since they are not meant to eat grain. Grain-fed cattle often need additional inputs in the form of various medications. The system is less efficient than many people might think when you start counting for all the needed inputs besides food.

However, you can raise cattle (and goat or lamb) on grass, water, a salt block, and maybe a little bit of grain if you live in a cold climate. Does it take longer? Yes.

Is it impossible? No. How do I know this? I have raised goats and sheep for meat myself this way, and I’ve watched friends raise grass-finished cattle. If you already have land, you don’t necessarily need a huge supply chain to produce your own meat. It just takes time, effort, and a willingness to learn.

Of course, most people don’t have enough land to raise their own meat, except maybe some quail, rabbits, or chickens.

But urban/suburban gardeners can often grow quite a bit of their own vegetables, which most of us should be eating more of anyway, relative to grain products. And a lot of people did this, in both Britain and the U.S., during World War II.

Now, the technocratic class likes to point to backyard gardens and hobby farms as silly, inefficient, and little more than a way for bored housewives to entertain themselves.

But actual research into what kind of farming produces the most calories per acre is not on their side. Limited “calories per acre” research exists because none of the big groups that can afford large studies would benefit from encouraging people to produce their own food. However, a study done in Britain revealed that, during WWII, home gardeners produced about 10% of the nation’s vegetables on less than 1% of its arable land being cultivated.

We need to keep in mind that this was before the Green Revolution, and crops were not being produced as efficiently on a large scale as they are today. So, the difference today may not be quite as dramatic, but it’s still there. The Green Revolution increased yields, but not by a factor of ten.

Anecdotally, many people know this to be true.

Of course, hobby farmers themselves believe this, but I first heard it from people in academia. I majored in ecology. Many of my professors said that small, bio-diverse farms produced the most calories per acre. I was intrigued because I’d never heard that from anyone else. When I started my adventure in food production, yes, I was just another at-home mom with babies and toddlers, looking for ways to save money and keep the kids entertained. But everything I have observed over the past fifteen years has confirmed what my professors said.

Small, bio-diverse farms do not make any one group wealthy. They provide a nice (though hardworking) lifestyle for families and quality food for small communities, but because of the relatively small inputs, they don’t enrich anyone else.

They also don’t provide the kind of food most of us grew up eating. If we were all supporting small local farms, those of us in cold climates wouldn’t be getting fruit year-round, other than what we preserved ourselves.

We’d have to cook from scratch a lot more, and we’d have to learn to eat seasonally.

This is not the same as starving. This is how a lot of people lived before NAFTA or before the various trade agreements comparable to NAFTA in Europe. I have an older Danish friend who grew up only getting oranges at Christmas as a special treat because they were so expensive. She still grew up eating good food, just mostly food that grows in and around Denmark.

It’s true that many people in poorer nations may starve.

But organic agriculture isn’t the villain. Again, the truth is extremely complicated, involving trade agreements, land prices, and relative levels of corruption. I don’t know the local conditions for each and every country, but knowing many American farmers as well as immigrants from Mexico, I can say that NAFTA has been disastrous for small farmers in both countries. Due to the vastly cheaper labor in Mexico, American fruit producers cannot compete with Mexican fruit prices. Due to American grain harvesting technology, Mexicans cannot compete with American grain prices.

This has resulted in many American fruit growers going out of business and an estimated 2 million Mexican farmers being displaced as of 2019.

(Want uninterrupted access to The Organic Prepper? Check out our paid-subscription newsletter.)

We don’t need a million and one new technological innovations to feed ourselves.

We need an end to the price tampering and trade agreements that benefit the few at the expense of the many. We need to stop consolidating food production. We need to change our expectations regarding the availability of cheap processed food. Do not let yourself be discouraged by experts insisting that technological expertise is needed to feed the world.

Technology has given us a wide variety of cheap foods. Believe me, I do enjoy mangoes and avocados as much as the next person. However, the system producing that technology is on the verge of collapse. Food is about to become far more precious, but that does not mean we all have to starve.

Family members during the Depression worked in the coal mines during the day and then tended their gardens after work.

It was hard, but they survived.

We can survive too.

Don’t throw up your hands in despair at the naysayers saying how ridiculous suburbanites are for trying to grow their own food. Could you support your family 100% on an eighth of an acre? No. But can you put a dent in your grocery bill? Probably, and every bit will help.  (Here’s our very best advice on gardening in small spaces.)

Successful low-input gardening takes time and mental energy. But why not start now? If you feel inspired to start producing your own food, run with it. Just make sure you start composting when you start gardening so that you have food for your plants. Will your garden be fantastically productive the first year? Maybe, maybe not. Mine wasn’t.

I planted things at the wrong time. It took a few years to nail down the correct varieties and planting dates for my climate and to really build my soil’s fertility.

But what else are you doing with your time? The days of being able to grab whatever you want at the store are coming to an end, whether you want to believe it or not. You can choose to spend your free time this summer streaming shows and goofing off online, or you can begin projects that will enrich your life.

There will never be a better time to start.

Are you gardening this year? Are you using organic methods? Share your thoughts on the future of food in the comments.

A lover of novels and cultivator of superb apple pie recipes, Marie spends her free time writing about the world around her. 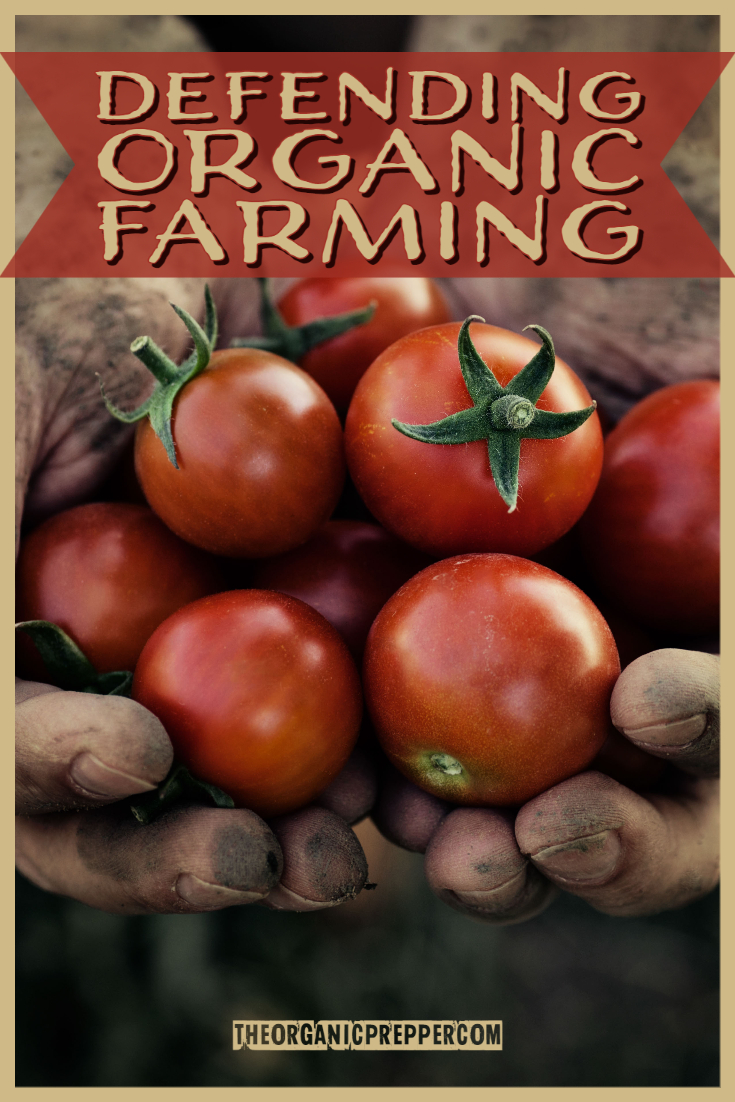